Don’t give up. Get help.

Don’t give up. Get help. 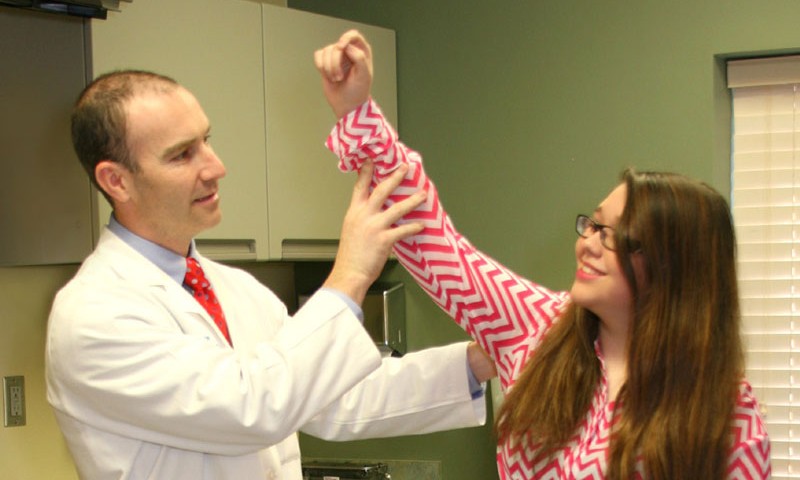 Fifteen-year-old Brittany Prescott has a message for those with physical disabilities—“Don’t give up. Get help. Don’t rule out any possibility.” 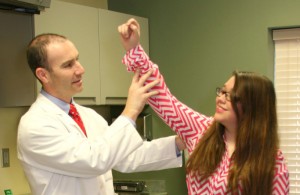 Dr.Trent Wilson examines Brittany Prescott’s arm during a follow-up visit in March. Brittany can now comb her hair, put away dishes and more, the result of undergoing surgery by Dr.Wilson on December 18.

The Handley High School 10th grader, who lives in Roanoke, was born with disabling shoulder weakness due to a brachial plexus birth palsy. “I was too big a baby and had a forceps delivery,” Brittany explains. “It messed up the nerves and muscles in my right arm.”

As a result, Brittany could not throw a baseball. She was unable to comb her hair. She could not clap her hands normally because of her shoulder weakness. She had to stop playing softball because she could not move her arm back to swing the bat. She loved playing volleyball, but did not have the strength and ability to hit the ball. Worst of all was enduring thoughtless comments from fellow students. “In elementary school and middle school, kids can be mean,” says Brittany. “I was always the ‘disabled girl.’ I was weird. I wasn’t like them.”

For 15 years, she had been living with this condition, managing it the best she could, but with no real hope that things could ever change. Last fall, her arm began to hurt badly. She went to see her nurse practitioner, April Anthony, who recommended shoulder specialist, Dr. Trent Wilson of The Orthopaedic Clinic in Opelika. Last October, she saw Dr. Wilson. “He explained which muscles were messed up and talked about surgery to fix the problem,” she says. “He’s a really nice guy. I liked him. I’d recommend him to anyone.”

On December 18, Dr. Wilson performed Brittany’s surgery, which  went well. During surgery, he transferred healthy and strong muscles to  different  places around the shoulder to compensate for the ones that had never worked properly. The goal of the surgery was to restore strength and motion that Brittany never had. Upon awakening she had no pain, and after one night at East Alabama Medical Center, she went home with her arm in a sling. It was not a typical sling, but one that kept her arm away from her body to protect the shoulder, and she slept in it for a month. A week or so later, she saw Dr. Wilson, and two weeks later she began physical therapy with Jason Shropshire. Lying on her back, she punched the air. Next, she performed 30 wall push-ups. Then she walked her hands up and down a wall.

“It was hard at first, but it’s gotten easier,” says Brittany, who now performs exercises at home. “Dr. Wilson was really impressed by how much I had improved when I went to see him again.”

Now, Brittany can lift her hand up to her head. She can brush her hair and use a flat iron to straighten it. She is able to put a book back on its shelf and unload the dishwasher, placing cups on cabinet shelves. She can even give a high five and clap normally — things she was never able to do before. During the next several months, as her strength improves, Dr. Wilson expects her to gain even more function. “We weren’t sure how well the surgery would work,” she says. “But it worked well. It may even be possible for me to play volleyball again.”

“Brittany is a remarkable young lady,” says Dr. Wilson. “This is a very difficult problem, and the solution itself is unpredictable, but Brittany has done an amazing job handling this and taking ownership of her progress. Her persistence and determination is an inspiration.”

According to Dr. Wilson, Brittany’s outcome has been outstanding. The procedure is rarely done, particularly in someone 15 years old. “Brittany’s progress has been great and that is mainly a credit to her commitment to therapy and to her therapist for his dedication and expertise,” says Dr. Wilson. “It takes a team of qualified people and motivated patients to get great outcomes. I’m so thankful to be a part of such a team at The Orthopaedic Clinic and to be able to help people like Brittany improve their quality of life.”